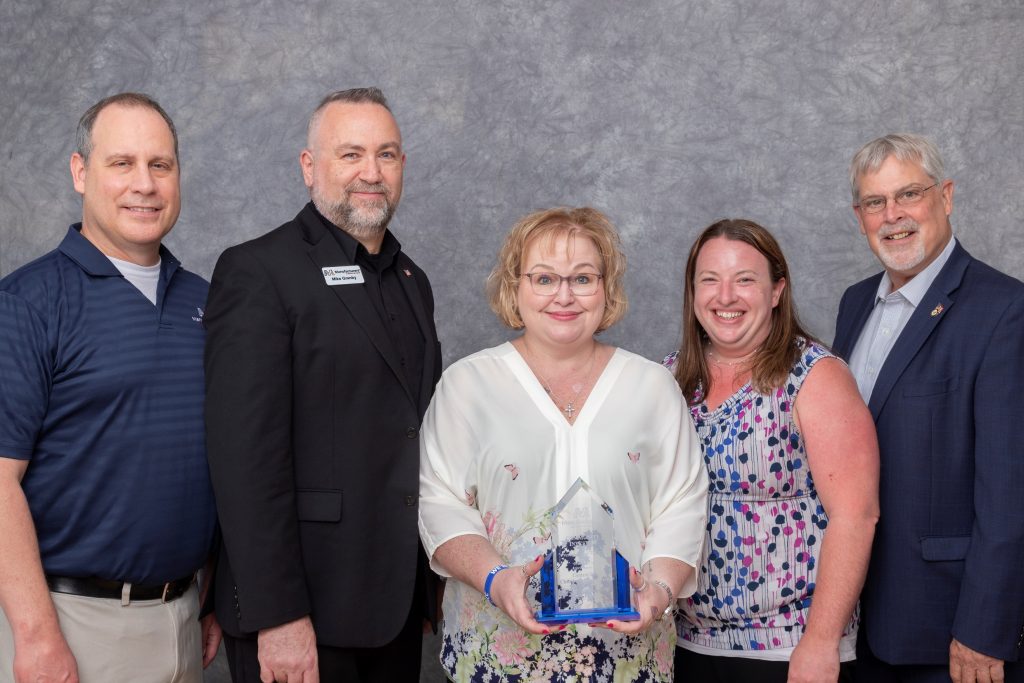 In the center is Tea Jay Aikey, President & CEO of the Central PA Chamber, accepting the 2022 Community Investor Award on the organization’s behalf by the Manufacturers’ Association at its Annual Event on June 14. From left, are: Tom Palisin, Executive Director of MA; Mike Granby, MA Board President; Aikey; Jessica Williams, the Chamber’s Finance & Membership Director; and Captain Richard Phillips, event keynote speaker.

YORK, PA – The Central PA Chamber of Commerce was honored with the 2022 Community Investor Award by the Manufacturers’ Association (MA) Tuesday evening, June 14, in York.

“I was astonished that the Central PA Chamber of Commerce was being recognized as the 2022 Community Investor by such an outstanding organization,” Aikey said. “It was a whirlwind experience attending their event, and I look forward to continuing to do work worth of such recognition.”

MA cited the Central PA Chamber’s growth of 85 percent over the last decade – despite the worldwide pandemic – as one of the reasons it was selected. Furthermore, the Chamber has become known as an active member in many area communities, making a positive difference and involving others to take part.

The Chamber also notably helped secure tax-free status for nearly 200 acres of land in Northumberland County to bolster economic growth. It has already lead to development in the last few years.

“Manufacturing is a big part of our history, and we continue to remember and support those efforts,” Aikey said.

The evening’s event was headlined by keynote speaker Richard Phillips, who was captain of the Maersk Alabama cargo ship, when it was hijacked by Somali pirates in 2009. He bravely put himself in harm’s way and offered himself as a hostage. The siege ended after a rescue by the U.S. Navy. Aikey and Finance & Membership Director Jessica Williams took the opportunity to meet Phillips and have a picture taken with him, along with the award presenters, at a pre-event reception.

Headquartered in York, the Manufacturers’ Association is a regional trade organization, serving several hundred member companies located within Southcentral Pennsylvania and Northern Maryland. They are members of the Central PA Chamber of Commerce.

The Central PA Chamber will also be receiving a certificate from President Commissioner Julie Wheeler, on behalf of the York County Board of Commissioners.